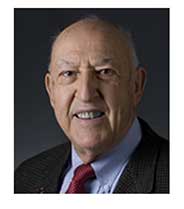 He has served as a consultant and reviewer to many governmental agencies such as the Office of Technology Assessment, the National Science Foundation, and the Transportation Research Board. He is the Founder of the Intermodal Transportation Institute, University of Denver and served as its Director from 1990-1999.

His research interests include the Middle East, sustainable development and transportation, including security issues. He has received fellowships and grants from The Alliance for Transportation Research, The American Research Institute in Turkey, Columbia University, Johns Hopkins University, the Social Science Research Council, the Ford Foundation, the Sloan Foundation, the US Fulbright Commission, the Social Science Foundation, the Rand Graduate Institute and the European Union's Atlantis Program, the USHEW and the USDOT. He has been a Senior Fellow at various academic institutions including St Antony's College, Oxford University, the Harry S. Truman Institute and the Institute of Advanced Studies (both at Hebrew University, Jerusalem) and has taught and lectured at numerous universities in Europe, the Middle East and Asia.

He is currently serving as the North American Editor of the World Review of Intermodal Transportation Research, Chair of the International Political Science Association's Science, Technology and Public Policy Research Committee, the U.S. Representative for the Transportation Security Cluster of the Network for European Communications and Transportation Researchers (NECTAR), President of the Denver Council on Foreign Relations, and is a member of the Executive Committee of the American Committees on Foreign Relations. He is author, co-author, or editor of many books and reports and has published more than two dozen book chapters and articles as well as several "oped" pieces in such journals as the Chicago Tribune, the Denver Post and Engineering News and Record. He has also appeared on numerous radio and TV programs in Denver as well as on The McNeil-Lehrer Newshour, the Voice of America, and National Public Radio.